LAS VEGAS – The ribbon is cut and attendees got their first look at hundreds of exhibitors on the Nightclub & Bar Convention and Trade Show expo floor. Throughout the day, thousands learned new tips of the trade through speaker sessions, reveled in off-site boot camp tours and explored the expo floor featuring a variety of vendors from around the world, where many discovered new products and services never before seen in the nightclub and bar industries.

The morning began with conference sessions that lasted throughout the day, including a panel discussion, Monetizing Cannabis, focusing on the recent legalization of marijuana in Nevada and the ripple effect that it has for the rest of the United States in money-making opportunities. Guests also had the chance to catch a keynote speaker session that featured Lee Cockerell, executive vice president (retired & inspired) of the Walt Disney World Resort, sharing tips on customer service magic and how to be a top business leader.

To kick off the opening of the expo floor, guests made their way to a red carpet for their chance to see their favorite celebrities, chefs, DJs and more. Celebrity appearances included cast members of Aussie Heat; ABSINTHE Las Vegas, Melody Sweets; pro BMX rider, Ricardo Laguna; comedians Ron White and Alex Reymundo;

In addition, the Shake It Up Classic & Flair Competition took over the expo floor’s main stage as 20 of the top bartenders from around the country competed for their chance to represent the United States at the World Cocktail Competition. Another new addition was the Nightclub & Bar Pitch Tank where vendors had the opportunity to present their new and innovative products or services to a panel of sharks to gain valuable feedback and a potential investment from one of the judges. Attendees also visited F&B Innovation Center, new to the convention this year, to witness live cooking demonstrations by chefs with over 150 years of combined experience in the restaurant and hospitality industries. 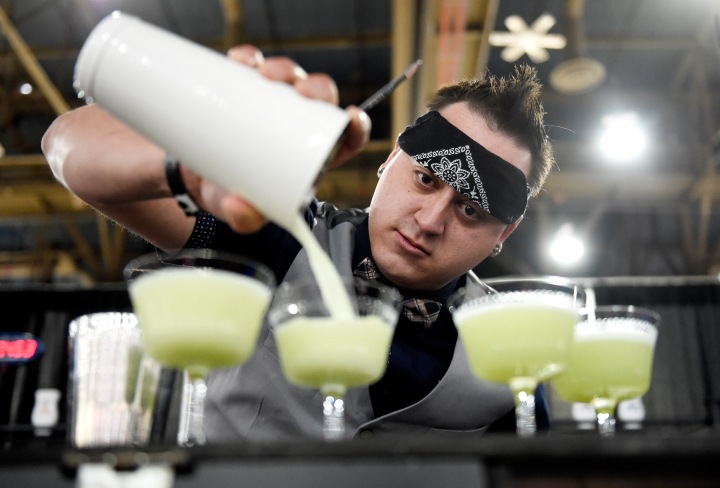 Partender Inc. announced their newest celebrity investor, world-renowned DJ and producer, Diplo, who joins the company’s other investors such as the Winklevoss’ and the Zuckerbergs. The company unveiled an entirely new feature to their inventory tracking program on the expo floor that will allow bars and nightclubs to send their inventory orders directly to suppliers within minutes.

Tuesday’s Platinum Party takes over OMNIA Nightclub inside Caesars Palace with a special performance by Kaskade.

To see the complete schedule of events, visit the Nightclub & Bar Convention and Trade Show website.